Is it a bird? Is it a plane? No! It’s your school resource officer! 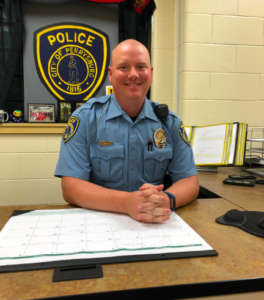 School Resource Officer Greg Cole is a fresh face to Perrysburg High School this year with a long history in Perrysburg.

He has served on the Perrysburg Police Department for 17 years, but worked in the shadows on midnight shift for 16 of those years. Cole says, “Midnight shift is a lot of fun because you never know what you’re gonna get. That’s where you get all the alcohol-related calls, the fight calls, and then just some weird, extreme calls. That’s what I liked about it.”

Like all heroes though, eventually one gets burned out from the regular routine. However, a beacon of light could be seen for Officer Cole.

“16 years is a lot to spend on one shift,” Cole admits. When he originally looked into being the school resource officer, he loved the idea of being able to be around kids, as he already “[coaches] youth soccer, [and is] involved with Boy Scouts.” To be the new school resource officer was a perfect fit for Officer Cole.

While there is no set term for Cole, he hopes to break the “record” set by the previous resource officer of approximately four and a half years.

As of now, Cole loves his position and PHS thus far. He likes it better in different ways than his old job working midnight shift, giving a laugh as he says, “It’s a lot nicer being waved at and said hello to than being flipped off and people running for me.”

In a more serious matter, he also enjoys the fact that he is able to engage with Perrysburg students during the school day. Each day Officer Cole is able to “[see] some people [he’s] seen outside of school while making some new friends in here too.”

One thing he would like everyone to know though is, “I’m not scary. Everyone says, ‘you’re so scary! You’re always stalking down the halls.’ I’m not trying to be scary. If you have any questions, feel free to come ask me or email me. Like I said on opening day, I’m your resource officer. I’m here for you guys.”