Hope is Not Lost for Football Season!

Home/Posts/News, Riley Pierce, Sports/Hope is Not Lost for Football Season!

Hope is Not Lost for Football Season!

Perrysburg’s varsity football team sadly didn’t get the energizing start to the season they were looking for this past Friday, 8/24, losing their first away game at Dublin Coffman, with a final score of 21-42. Despite the loss, Perrysburg football season shows promise. 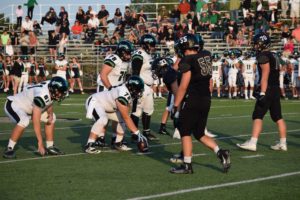 During the game, Perrysburg gained 115 yards rushing and 178 yards receiving. They also gained 262 yards passing, earned by Drew Sims, a junior, who plays quarterback for the team. These stats earned Sims a spot on the Toledo Blade’s “Who were the area’s top performers in Week 1?” list.

Sims is not the only player to watch this season based on the teams first game. Kameron Olds, a sophomore this year, is someone to watch. Olds scored a total of 12 of the 21 points earned during the game. Others to watch are Caleb Gerken, a junior, who led the team in rushing yards this past game, and Ian Riddle, a senior, who led the team in receiving yards this past game. 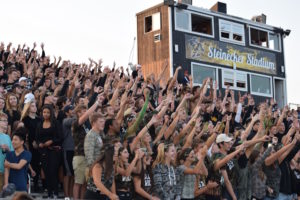 A loss this early may have concerned some Perrysburg fans; however, the season has just begun. You can help motivate the team to win during games by coming to the games and joining the amazing student section

If you are excited to come to support the varsity football team, the next football game is this coming Friday, August 31st, away at St. John’s Jesuit. Also, the first home football game is on September 7th and is against Whitmer.