Rowing All The Way To Victory!

Rowing All The Way To Victory!

The sun is out and the river has thawed meaning the start of another season for Perrysburg’s crew team. Despite the weather not always being the best, practices continued and their first regatta was a couple weeks ago. I went to their regatta in Ann Arbor to find out about the team. 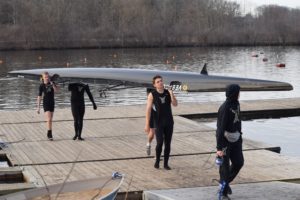 Even carrying the boats is a team effort.
(Photo Credit: Riley Pierce)

Just last year in the spring of 2017 Perrysburg rowing club became an official high school sport for the school for the spring season. The fall season of rowing is still considered a club activity at Perrysburg.

Between these few seasons so far, the “team has grown from twenty-six roughly to thirty-five” rowers according to Savannah Bales, one of the team’s coaches.

Bales also spoke about the strong teamwork showed by the team saying, “We’re seeing a lot of intensity and commodity and teamwork come from this team, there have been so many positives and

It’s really infectious. Having everyone going out there together, taking every stroke for each other, you can tell its really for the team.” 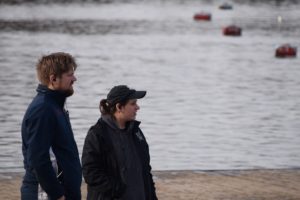 Chris Samul, Perrysburg’s other coach, also commented on the strong team atmosphere. “The team culture is really great, and despite the weather rarely being the way we want it to be, they remain positive and in good spirits. It’s that kind of attitude that will lead to success.”

Teamwork is extremely important in rowing, every stroke you take needs to be in sync with everyone else in your boat. This skill is extremely hard to master and can be a lot of work. Despite this Makena Gruden, a senior on the team, explained, “Rowing is a lot of work but to see it all pay off in races, and to see the team grow is a huge accomplishment.”

While this rowing season is now winding down, the fall season is just around the corner. At the rate at which the team is growing and their dedication to the sport, I can’t wait to see what they do next.