The Rise of JUUL and the Negative Effects of Vaping

Home/Posts/Emily Swick, News/The Rise of JUUL and the Negative Effects of Vaping

The Rise of JUUL and the Negative Effects of Vaping

*Disclaimer: When searching for information used in this article, all rules and regulations were followed. 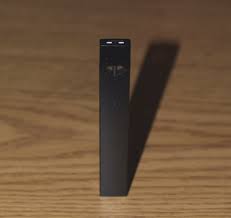 JUUL is a new e-cigarette that is taking the underage smoking scene by storm. An e-cigarette is an electronic cigarette-shaped gadget that transforms a nicotine-based liquid into vapor. The vapor is then inhaled. “E-cigs” are used to simulate the experience of smoking tobacco.

The device is a cheap alternative to smoking cigarettes. From internet searches, one is able to gather that a starter kit includes: the JUUL device, USB charger, four JUULpods in the available flavors (Virginia Tobacco, Cool Mint, Fruit Medley, and Creme Brulee), and a one-year limited device warranty. In general, the JUUL costs anywhere between $35 to $50, and one pack of four JUULpods is around $15.99.

“It has developed into a huge phenomenon this year… what I find so intriguing is the boldness of the students, it is just… I don’t understand it,” said Melissa Notestine, the Alcohol, Tobacco or Other Drugs (ATOD) counselor at PHS.

From its launch two years ago, JUUL has increasingly popped up in schools. The sleek, compact USB-like design allows students to hide the device easily, and the cheap price makes it extremely attractive for teens. This accessory is charged by plugging a USB attachment into a USB port on a computer, allowing the students to sneak their usage.

Dr. Mila Vascones-Gatski, who is a substance abuse counselor in Arlington, Virginia, stated that last year, she confiscated only one e-cig in six months. This year, she said she has been confiscating around two per week.

Here at home, Notestine conveyed, “Prior to this school year, I probably had 5 or less referrals for vaping. This school year alone, I’ve had more than that number. It just has become a very common practice with some young people.”

Perrysburg High School has strict rules against the use of tobacco or e-cigarettes on school grounds. According to the Perrysburg High School handbook, if one is caught violating the rules, they will be given a five-day suspension from school. On the other hand, the suspension can be reduced to three days if the student meets with the ATOD counselor for an evaluation and follows any requests given to them.

Junior Gabriella Benington expressed, “I don’t know if PHS has a vaping problem because I’ve never really seen anyone from our school do it.” 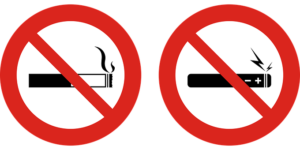 The repercussions of using e-cigarettes as an underage person, or in general, are extremely serious. E-cigs contain nicotine, which is known to be highly addictive. According to the Centers for Disease Control and Prevention (CDC), using these devices, especially at a young age, is detrimental to the development of one’s brain. Brains continue to develop well into the early to mid-20s. Besides nicotine being in the aerosol of e-cigarettes, other carcinogens are involved, along with tiny particles that penetrate deep into the lungs. These tiny particles are very harmful to the body.

Benington stated that “I do not really care if people vape, as long as I’m not around them… it makes me uncomfortable.”

The CDC also states that although deteriorating physical health is a concern, e-cigs can also cause other unintentional injuries. Defective batteries within e-cigarettes can cause fires and they can possibly explode, which in return can end in serious injury. Acute nicotine exposure is toxic as well, and there are reports of adults and children being poisoned in many ways: swallowing nicotine, breathing it in, or absorbing the e-cig liquid through their skin or eyes.

As for advice to those who are seeking help, Notestine advises “Come find me! I would be happy to help them in coming up with a plan to help them stop using their JUUL device, or whatever it may be. If that’s not something they feel comfortable with, then do some research, get some education, find out what’s in these products and the harmful effects.” She wanted to deeply express that there are so many resources out there and that no one has to feel alone.

E-cigarettes and vapes are harmful whether you are legally able to use them or not, and only one question remains: is using an e-cigarette worth it?