On the morning of Thursday, April 19th, a group of PHS students began to pass around flyers promoting a school walkout on the behalf of Bobby Shmurda. Readers may ask, “Who is Bobby Shmurda? Why are people walking out? Did anybody walk out already?”

Bobby Shmurda, whose birth name is Ackquille Jean Pollard, is an American rapper and song artist. According to Billboard, he was recently sentenced to 7 years in prison after accepting a plea deal on accounts of a 4th-degree conspiracy theory to criminally possess a weapon and 2nd-degree criminal weapons possession.

Part of the controversy arises from the fact that Shmurda said he was forced into the global plea deal by his attorney, among other legal mishaps. These factors have garnered a massive support system behind the rapper and his “unfair” prosecution. 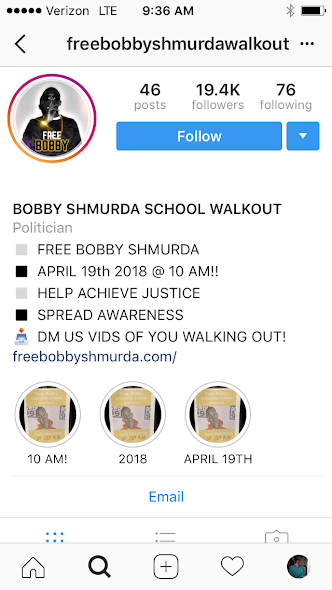 A screen capture of the Bobby Shmurda School Walkout page.

Some of this support system has even led to a pledge of a school walkout at 10:00 AM, Thursday, April 19th to protest and “Free Bobby.” An Instagram page entitled “freebobbyshmurdawalkout” has already gathered a massive following of 19.4 thousand followers. While the bio reads the taglines “help achieve justice” and “spread awareness”, the majority of posts are edits and memes regarding the controversy.

The joke factor of the campaign clearly showed this morning at PHS. When talking with Elaine Anctil, a study hall monitor and front desk manager, she said that she was neither aware of the walkout nor did she see any student actually walk out.

“[It’s] not necessary,” she said. “It doesn’t have anything to do with school, so I disagree with the walkout.”

Aside from the lack of relevance, students refrained from walking out for other reasons as well. John Usher, a junior states that “I knew it was April 19th and it was to free Bobby Shmurda. I didn’t walk out because I personally don’t think he should be freed. I think he did it.”

Regardless of the outcome of the situation, the organization of a school walkout itself shows the power that our youth has today to use social media as a means to spread awareness and sometimes change of certain issues in today’s society. As much good as that may cause, social media can often be a double-edged sword and most plans for social justice turn out to be jokes or gags, such as the supposed walkout this morning.

But if there is anything to take away as civilians from this new age of technology and modern media, it is that said media can easily be tarnished and bent to be used for frivolous causes and concerns. That is especially the case for walkouts, as they have recently become a more popular form of peaceful protesting. The underlining fact behind this seemingly faux walkout and the like it is that such events begin to trivialize the issues associated with the more publicized national walkouts.

While the supposed Bobby Shmurda walkout may have started off with good intention, it falls into the trap of mockery. That being said, it shows the powerful notion that one small idea can grow into a movement. Like the fictional character Ben Parker once famously quoted, “with great power comes great responsibility.” As we attempt to navigate this coming year, hopefully, we can use that power for positive change.