Opinion: The iPhone X is Not Worth Buying

Home/Posts/News, Opinion, Zach Isaacson/Opinion: The iPhone X is Not Worth Buying

Opinion: The iPhone X is Not Worth Buying 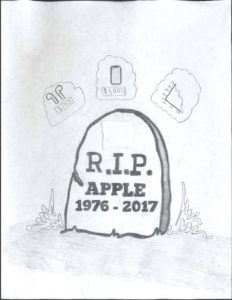 The iPhone is considered a pillar of the world’s community by many people. In a place like Perrysburg, they are quite a common sight, especially among students. Every time a new iPhone is released, there is always at least ONE student who has it within the first week of its release. However, the number of issues customers have with the iPhone X could finally destroy Apple’s reputation as the best phone provider in the world.

Let’s dive into the cesspool of issues that I, alongside others, have with the iPhone X.

It seems that Apple’s evolution of the iPhone has resulted in a washed-up piece of glass with a $1,000 price tag. It is common knowledge that an iPhone without a decent case is easy to break, but the $1000 price tag makes this an extremely risky purchase.

The peripheral features of the new phone is the real killer though.

As an iPhone 6 owner, I could run out and buy a pair of classic plug-in Apple earbuds for $30. That, and two other iPhone 6’s for less than $1,000. An iPhone X, however, requires many expensive accessories.

Apple faced abasement for getting rid of the headphone jack: one of the most necessary and essential fundamentals to appear on any phone, ever. The everyday yearning to listen to music has been made more difficult solely because Apple wants to fix the issue of ‘tangled wiring’, but their solution has only made the issue worse. By introducing wireless earbuds, a whole new dilemma has been proposed.

Apple has finally proven themselves to be over-interested with impressing the fanbase rather than introducing convenient and functional technology. In a boisterous school environment, students who are so closely tied to their phones need something more durable for constant use.

Apple’s classic wired earbuds are cheap and easy to manage. The large problem with having wired earbuds with a dongle for iPhone X is that it is impossible to listen to music and charge your phone simultaneously. To resolve that problem, Apple would like you to throw another $40 at their bank accounts. In return, you get this large adapter that supposedly stops working after about 4-5 months, according to some customers.

If that route seems too tiring, feel free to examine the $150 price tag on the new Apple AirPods. At first glance, they appear small and easy to lose, unless you’d like to carry around the “new and improved” charging case for them. They just don’t seem worth it. Easy to lose, overpriced earbuds stuffed into a case that would be fatter in my pocket than wrapped up earbuds? No thanks.

Sometimes things can get TOO innovative, to the point of which they become less practical than initially thought.

The iPhone X is just a slightly more revamped version of its predecessors. The bottom line is that we all want something that we can conveniently carry with us/have at our expense, and that is not what Apple has given us this year. Based off of what I’ve seen personally, I believe that it is not a good buy.