Should We Pass on the New Hall Passes?

Home/Posts/Emily Swick, News/Should We Pass on the New Hall Passes?

Should We Pass on the New Hall Passes? 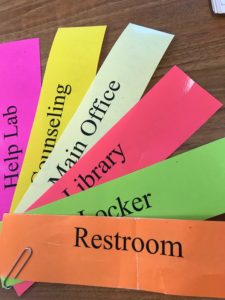 New hall passes are rocking teachers’ worlds! A unique system of hall passes has been set into place this year, arranged by color and place, thanks to Mrs. Janice Ray. Ray is the brand new Dean of Students here at Perrysburg High School, although you might have seen her as one of our very own Chemistry teachers just last year!

When asked why these new passes were implemented, Ray explained, “Last year, [the administration] took away the agenda books and told teachers to come up with their own system of issuing hall passes, which quickly became that there was no system, and people were everywhere in the hallway.” She also expressed, “I wanted to unify the system, but we have a few hang-ups… I’m open to suggestions.”

Mr. Matthew Horen, a History teacher, voiced, “I am totally fine with the pass system because it cuts down on the distraction time for me, I don’t have to hand write a bunch of stuff.”  It seems that many teachers were struggling to continue teaching under the old hall pass system.

“We’ve always used passes to keep track [but] teachers don’t have time because they’re teaching and don’t want to be bothered by that,” Ms. Elaine Anctil, a study hall monitor, conveyed.

Mr. Kevin English, a Biology and AP Biology teacher, disclosed that these passes seemed to “simplify the process, but the restroom passes are gross. [He] doesn’t want [the students] to hand them back.” These little tickets are moved around so often, from hand to hand to hand, often times taking a pass into the restroom. This raises a sanitation concern. Could these passes be spreading germs?

When this topic was brought to Ray’s attention, she spoke out that, “That is something I am thinking about… I think we could come up with a better system.” Students have also expressed their concerns about this issue.

Junior Lauren Patterson mentioned, “I think they’re not very sanitary, and teachers won’t take the time to sanitize them after each and every use.”

Patterson went on to say, “I feel like they won’t last because teachers might get tired of trying to keep track of all the different passes.”

Elaine Park, also a Junior, chimed in, “I don’t think they’ll last at all if teachers don’t enforce them.”

The administration and Mrs. Ray are hard at work trying to figure out an efficient system.  If there are any new ideas to help better these passes, make sure you stop Mrs. Ray the next time you see her to explain!

Update: This article has been updated to correct formatting errors among other technical glitches.