Opinion: “13 Reasons Why” Producers Should be Questioned

Home/Posts/Arts and Entertainment, Editorial, Sophie Staats/Opinion: “13 Reasons Why” Producers Should be Questioned

Opinion: “13 Reasons Why” Producers Should be Questioned

“Four out of five teens who attempt suicide have given clear warning signs” (Youth Suicide Statistics). This is true for the fictional character Hannah Baker from the hit Netflix series, 13 Reasons Why.

The show’s plot came from the author, Jay Asher, as he was the writer of the book by the same name. On March 31st, 13 Reasons Why became a public show for every Netflix user. It is based on a dysfunctional teenager, Hannah Baker, and why she decided she no longer wanted to live.

Before her death, Hannah recorded her voice on 13 cassette tapes, every tape being a different reason for her suicide. Each episode is one side of the tape, and focusing on one specific person. The show portrays Hannah’s hardships, and also the struggles of the people who “caused” her death. It shows a dark side to what happens in high schools, every student playing their role.

While many people are involved in Hannah’s deep depression, there were some innocent in it all. Clay Jensen, a beloved friend of Hannah, receives the tapes in the first show.

Many teenagers have already binge watched this show, but there are some issues erupting about the hit series. Suicide, especially in media, is touchy in every form. 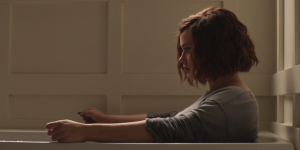 A screenshot from “13 Reasons Why”

The last episode of 13 Reasons Why exhibits Hannah Baker cutting open her wrists and bleeding out into the bathtub. Not only does this seem over the top, but Jay Asher wrote it differently in the book.

Asher wrote Hannah’s death as being caused by an overdose of pills. Both methods are horrible for any teen to do, and the show’s intense depiction of Hannah’s death triggers anxiety for viewers. Making the fictional character of Hannah Baker slit her wrists on the camera truly reveals the intention of the show’s producers: they want to create controversy rather than bring assistance to depressed teens. 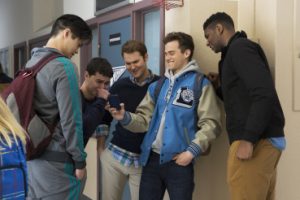 This is not a warning to teens or a way to help those already struggling. This show is simply entertainment.

13 Reasons Why deceives teens and leads them to believe there is no other way out. Many instances include when Hannah Baker went to get help from her school counselor, Mr. Porter. Hannah Baker had mentioned and showed many signs of possible self-harm in this episode, but Mr. Porter did nothing. The sad events do not even stop there. Not only does no one reach out in the show, but there are multiple 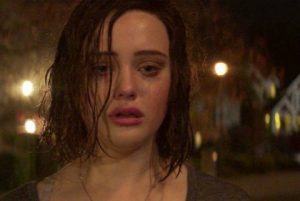 scenes of sexual abuse. Both Jessica, a one-time friend of Hannah, and Hannah herself, are raped by Bryce Walker. In the book, Asher had it written that Jessica had been raped, and Hannah knew but did nothing about it. On the flip side, the show wrote Hannah as a rape victim, too.  As if one rape was not enough, the show decides to attack another character’s emotions and body.

With so many teens considering suicide today, this show is a catalyst for future tragedies.

Many teenagers, and even children younger than twelve, are witnessing the horrific events of this show. It is misleading the truth about high school, and possibly opening young adults’ knowledge to sexual abuse and suicide.

The show’s producers should really ask: If so many students are watching this with problems similar to Hannah Baker, will it cause them to go down a similar path?

For Students In Need:

Believe it or not, school counselors are always here. No matter what, there are people who can assist those depressed, including right here at Perrysburg High School.

It’s difficult at times to understand that you need and deserve help. Sometimes the hardest things to do is to say, “I need help”, and according to school counselor, Rick Rettig. “That takes courage.”

This year, more than ever, students have been reaching out to their counselors. On the other hand, there are still many afraid to come out. If you notice someone slipping, help before it gets worst. Be the difference because maybe you can save a life!