BREAKING- President Donald Trump has fired the Attorney General Sally Yates for not defending Trump’s executive order to ban people from 7 countries where the majority of people are Muslim. She was hand-delivered a letter on Monday, January 30th, after refusing to defend the ban in court. 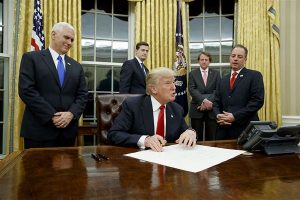 CNN had reported that Yates told the lawyers of the Justice Department to not make legal arguments to defend Trump’s executive order to ban citizens of those 7 countries.

Within a day of CNN’s report, Yates received a letter from Trump telling her that she is relieved of her duties as the Attorney General.

Yates stated, as the leader of the Justice Department, that the position is “legally defensible” and also “consistent with this institution’s solemn obligation to always seek justice and stand for what is right”(Washington Post). 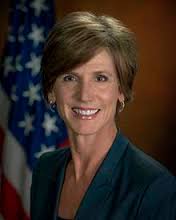 According to CNN, Dana Boente was immediately sworn in as the new Attorney General. He intends to only be there until Trump’s first choice Attorney General, Jeff Sessions (R-Al), is confirmed by the Senate

He immediately told the lawyers in the Department of Justice, “to do our sworn duty and to defend the lawful orders of our President.”

As of right now, Boente is the current Attorney General, but very soon, it would be expected, Sessions will be replacing him.