Let’s Cut to the Chase: Is Wrestlers’ Cutting Weight Unhealthy?

Let’s Cut to the Chase: Is Wrestlers’ Cutting Weight Unhealthy?

“Have you ever done anything unhealthy to cut weight?”

“I haven’t eaten for three days.”

As a part of preparation for wrestling and the tournaments that are in session, wrestlers are required to make their weight class in order to participate in a tournament, which involves losing, or “cutting” weight. In a handful of interviews with people who were crucial to discover the question some may have pondered: Are the techniques that wrestlers use to cut weight unhealthy, and in what ways can it be considered healthy?

School nurse, Debbie Reddick, is keeping an eye on the wrestling team as the season continues.

“I do find that occasionally during wrestling season, and I know thats started so now I’m keeping my eyes out for these guys, sometimes they will come down, complain of dizziness, headaches, whatever. I start asking them about what they’ve eaten, they’ll tell me they’re trying to cut weight, so sometimes I worry that they get a little dehydrated because they’re not drinking like they should, so that they don’t have water weight for when they weigh in. Sometime its cutting meals or cutting way back on meals, and there are times that I worry that maybe they’re just not eating enough to sustain a growing adolescent body.”

Reddick explains the healthy aspects to wrestlers and cutting weight.

“Sometimes, too, the upside of that is that they to tend to eat healthier foods, fresh foods fresh vegetables opposed to high fat foods, or high carb foods. I think some of them (wrestlers) get it that you can eat healthy and lose weight when you’re eating the good foods, the fresh foods. One of the sayings I always have with students is to eat more from the farm, less from the factory. So anything you pick off a tree or pull out of the ground is going to be healthier, have fewer calories, less fat in it, you can eat that until you are filled with those types of things and still not really gain weight because it’s good food. I do think they make better food choices during wrestling season because of that.”

Emergency Medicine Doctor Timothy Scott kindly accepted the request of an interview, and took some time out of his schedule to answer some questions about the health aspects of cutting weight.

Even though he was on the spot, he explained thoroughly the dangers to cutting weight and the effects it can have on the wrestlers bodies and health as a whole.

“I think a lot of the weight cutting that is the way that they (wrestlers) cut weight that is unhealthy. So a lot of times when they go into hot saunas or hot tubs, and they’re wearing things on their body that don’t let them sweat and exchange air, like some wrestlers will work out with garbage bags on them, and these things all can increase the risk for hyperthermia, or their body temperatures can get too high which can cause serious complications. Then the other thing would have to do with how fast they (wrestlers) cut weight. So, if you were cutting weight, lets say, 10 pounds over two days, number one, a lot of that weight is going to be water weight, so you are going to be significantly dehydrated, dangerously dehydrated, and then that can cause injuries to your kidney, significant dehydration can cause what is called an acute kidney injury. The other thing is, in terms of how fast you are doing it (cutting weight), it can throw off all of your metabolism and your hormones out of balance, which can actually affect you up to weeks or months. So I think to recap, I would say it’s the way they do it, like if they’re doing it with excessive heat, that’s dangerous, or even just exercise, if you are exercising for ten straight hours on a bike or treadmill, that is just going to be pure exhaustion. So it’s the way they do it and how quick they do it.”

Scott mentions that there are ways that cutting weight is healthy.

“I think that you can argue a lot of times that, if they (the wrestlers) approached it from a  strict dietary perspective, and a moderate amount of exercise, it could be healthy. So, let’s say they’re drinking adequate amounts of water, and they’re just avoiding, let’s say even all carbs from their diet, so they’re just eating protein, lean meats, vegetables, drinking protein shakes, and water, and then exercising in what’s considered a healthy amount, then I think that would be great, I mean I think that’s appropriate, and that can be considered a healthy way to do it (cut weight). And of course, then you would just have to consider the amount of time, so lets say instead of trying to cut all of this weight in two days, they say “okay I want to lose ten pounds within a month, or even two weeks maybe, would be much healthier than a couple days before a weigh in.”

Of course, an interview with a Perrysburg wrestler was imperative. Gage Graham gladly took a few minutes of his time to discuss his methods to cutting weight. 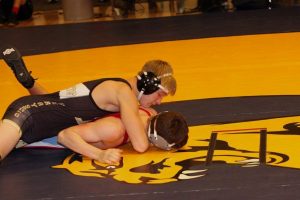 Graham admits what is considered to be an extreme way on how he has cut weight in the past:

“I haven’t eaten for three days.”

Information about what other wrestlers have done in terms of cutting weight in the past was provided, and then Graham agrees that he had done similar things.

Graham then agrees that he has friends on the team that have done similar things as well.

Without a doubt, this interview would not be complete without asking a few questions from the coach of the Perrysburg wrestling team, Sam Cotterman. He discussed the ways he recommends his team on how to approach cutting weight for the season in a healthy manner.

“They can do it in a slow progression instead of trying to drop all the weight at the very last minute.”

Cotterman then explains the main problem to wrestlers and cutting weight.

“Yeah, but because of the kids trying to cut all the weight a lot at one time, the alpha test takes it’s place and the test gives them from the day they take the test, it gives them a progression down that they’re allowed to weigh. The problem is that it helps a little bit, but then the kids still will then, after they make that weight, and after the tournament, they eat a lot and drink a lot, making their weight go back up, and then now they have to cut it back down. ” 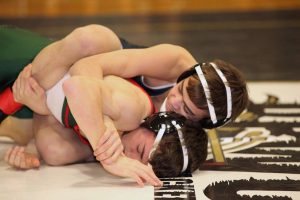 The idea of how wrestling sets goals for the wrestlers, and how it has a positive effect on them by building an immense amount of character was discussed.

“It definitely builds character. Wrestling is a sport that is grueling in so many ways. Its grueling because teenagers do not like to miss a meal, their bodies are growing. The sport changes their muscle endurance. It takes a lot of mental toughness to get over that. My opinion is if you wrestle, you can do about anything.

So, back to the question at hand: is wrestlers cutting weight unhealthy? It’s unequivocally a tough question, and it all comes down to how the wrestlers themselves decide how to cut the weight, and the manner that they go about doing so. Wrestling is a sport that builds character, sets goals for the wrestlers themselves, builds perseverance and is considered to be one of the most diverse sports in the world, and just as Cotterman stated, if you can wrestle, you can do about anything.

Other stories by Izzie Knestrick: