Young Democrats is a new club here at PHS. Areeb Ahmed (senior) got the idea of starting this club from the Young American’s For Freedom, a conservative political club at the high school. Ahmed in contact with the state organization of Young Democrats. Ahmed brought this information back to Perrysburg and started the Young Democrats club to make a difference in the community and nationally.  Their goals as a club are to volunteer in the community, lobby city council, and getting a public artwork to display in the community.

The logo the Ohio Young Democrats

What gets people to join a great new club like this? How can you join? Sophomores, Emma Jaromin, secretary, and Kaitlynh Nguyen, vice president, were asked about why they joined this newly formed club.

Jaromin stated, “I’m a democrat and we need to get involved especially in a Republican district”.

Nguyen commented, “For me, I just wanted to get involved and I wanted to kind of build really meaningful relationships”. 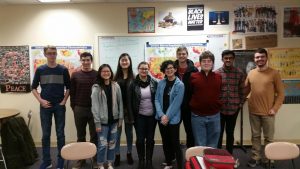 You don’t have to be a Democrat or aligned with any political party to join this club. Young Democrats spend time talking about politics and other local, national and international news. They also plan for events like having the public artwork or joining marches for women’s rights and things in that nature. This club is about helping others and making a difference in the community. Not only will you be helping others but you will also meet new friends and build bonds with people that share common interests.

The next meeting is this Thursday, January 26th in Mr. Josh Spiegel’s room 248. There will be snacks!!