How much did can a single call affect not only the outcome of the Big Ten but all of college football itself? Due to one extremely controversial call in this year’s Ohio State vs Michigan game, the teams going to the college football playoffs are different than if this call had gone the other way.

The questionable call was about whether Ohio State’s quarterback, J.T. Barrett, had crossed the first down line with forward progress or was stopped just before the line 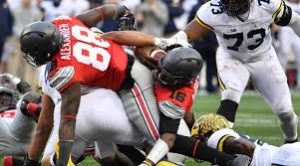 in overtime at the Horseshoe. The original call was that he did reach the first down line but the booth did review the play. If the play was overturned then Michigan would win the game right there but if the play stood then Ohio State would keep their drive going. 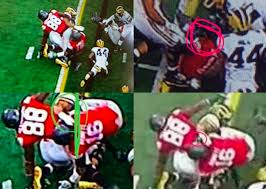 Coach Kregel, the head football coach at the high school, agreed that it was a first down by saying, “If you look at the forward progress, and I’m seeing aerial views of it, when he had forward progress I thought that the ball was over the line”.

Kregel also went on to explain that the position of the ball was correct by stating, “Their not going to change their call on where they spot the ball unless it’s absolutely clear on video that — ‘man, we were off by a yard’ — they’re not going to move it up or back two inches”.

Referees determined there was not indisputable video evidence to overturn the first down.  It seems as though the referees did make the correct decision in letting the play stand. Ohio State went on to beat Michigan 30-27 in double overtime in this amazing thriller of a rivalry game. Due to this loss, Michigan have dropped to number 5 in the playoff polls, while Ohio State keeps their 2nd place position making them one of the current playoff teams.