Cross country boys and girls teams competed in the state championship last week against 19 other schools. Despite coming in 20th place, going to states for the first time since 1972 is a major accomplishment. Their performance has brought honor to our distinguished school.

Andrew Monheim tells me, “I think we performed pretty well. We didn’t have any crazy fast times, but we weren’t far off from our best times, and with very good competition we still ran really well”. 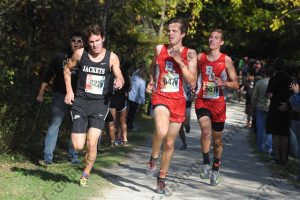 Andrew Monheim gives his all to beat his opponents

The other teams at states were very strong this year, but our team did their best coming in with a time of 16 minutes 45 seconds, compared to the lightning speed of 15 min 2 seconds which was the top time. Terrain definitely has an impact on the race times.

Monheim described the conditions, saying, “It was mostly flat and really low cut grass, so it made for fast times”.

Monheim and most of the team plan on running throughout the offseason to keep their stamina at a good level. Though the training may not be as intense, Andrew does look to improve for next year’s season. He plans on getting under 16 minutes 10 seconds. Good luck next season to all members of the cross country team!