Many of people may not have known that Perrysburg has a rowing club. Crew is a club where the rowing team take out special boats everyday on the Maumee river. 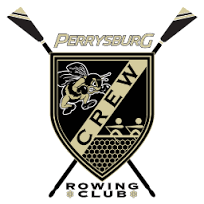 Ethan Basham, member of the rowing club, told me what they do for rowing practice. “We take out boats everyday after school and we row either a 2k or 5k everyday”.

Basham also explained where and how they get the boats on the water.

“We have a boathouse in downtown Toledo. We take out boats from the boathouse, we have someone take us out (usually a coach) that will take us out onto the water”.

For their daunting workout regimen, they compete to show off the hard work. A series of rowing races is called a regatta, where crews race against other teams. Basham told me that teams will come from all over the Midwest and even Canada travel to be in these races. They will usually race 2 times for either 2k or 5k each.

Rowing is one of the few sports teams at Perrysburg that is coed. There is a difference between fall and spring rowing.

Kendall Kunick, a student that rows in the spring season, told me, “Fall rowing is where you can have intermixed boats which is boys and girls in the same boat”.

Kunick has no worries about future splits to the team. “I don’t think the team would split because we like being one solid unit”.

She believes that keeping the team together as one will benefit not only the rowers but also the coaches. Kendall’s favorite moment of rowing is when a few boys on the team accidentally flipped their boat. They all fell into the cold March water and it was probably very funny to watch.

The Perrysburg rowing team has a very bright future with the consistent stream of new rowers every year getting involved. They will do very well.