The Perrysburg Yellow Jackets football team took on the Whitmer Panthers on Friday September 9th, 2016. The game was at the magnificent and always roaring Steinecker Stadium. 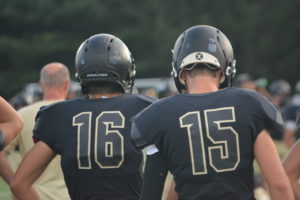 Despite the disappointing outcome of the game, the spectators were emphatic throughout the harsh times where many fans from other teams wouldn’t make much noise.

We showed Whitmer that our fans will never back down.

I had a chance to talk to freshman Brendan Graves before the game and ask him about how he felt coming into the Stadium. He responded, “I feel energized and pumped up. It’s crazy. I’m stoked!” He was clearly very excited about coming into the stadium even as a freshman. Everyone at a football game can get really into the feeling that the hyped atmosphere can bring.

I was lucky enough to meet up with foreign exchange student, Milla Rakitta. I asked her about how sports events were in her country of Hungary. She told me about how this experience is different to her by saying, “In our school, we don’t have teams like this, so I think that you are really part of the high school and we are a family”. 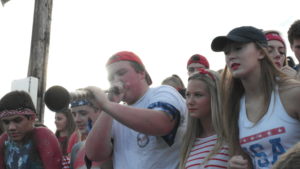 It feels good to know that our school is bring something new to the lives of others visiting our country. Milla will be able to take this experience home with her and keep it the rest of her life.

A third and very gracious person that allowed me to interview her was senior Chloe Carter. I asked her a more personal question about how her experience at football games have changed from freshman year to senior year. Her very strong response was, “Games are definitely more fun because I get to stand in front and you feel like you are more a part of the atmosphere”.

In short, the games have become much more enjoyable for her and undoubtedly for most of the seniors who attend. 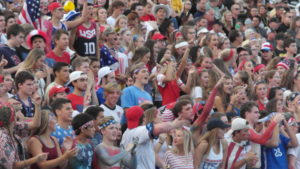 I was fortunate enough to catch up to another senior and proud supporter of Perrysburg football, Sam Miller. I asked him his strategy to keeping the fans loud and hyped up during times when there wasn’t much happening on the field. He told me, “I like to get a big group to go back to the freshman and sophomore area and try to get them riled up and even get them to start their own chants.

Sam really wanted students and other fans to know that the juniors and seniors can’t do all pumping up for the football team. The fans are just as important to winning the game as the players are. 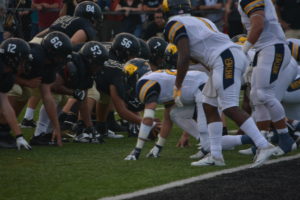 As many of us know, football can be very exciting, but sometimes people may get too riled up and make bad decisions.

Administrators Dr. Michael Short and Mr. Dave Dakolios believe in a high standard of maturity during big events like these.

I asked second-year teacher John Moravitz what he expected out of Perrysburg students and fans during sports competitions. He responded by saying, ”A very high level of maturity. We want to show our high-class of maturity to other schools.” I personally had Mr. Moravtiz in class and know that he loves to have fun, but I also know that he expects us to act like adults.

There are many different people who go to football games. Many enjoy it in different ways. That is the real win. People are able to come together and cheer on their school in a fun, emphatic and also mature way. I believe that with working together in the stands and on the field, our football team will go very far and bring glory to Perrysburg High School.