The key to success might be in your fingers

Home/Posts/News, Topics of interest/The key to success might be in your fingers

The key to success might be in your fingers

[note note_color=”#f0f0eb”]Aryn Hinkle, a PHS math teacher, asked her statistics class to study topics of interest and make their own statistical analyses. As part of the assignment, she also asked the students to write articles for eSomethin to teach her students about the importance of communicating their findings. eSomethin published 10 of the students’ articles.[/note]

By Darcy Cavanagh
Special to eSomethin

On Tuesday November 10th, the students of Perrysburg High School were the subjects for groundbreaking studies.

Well… maybe not groundbreaking, but at least worth breaking your fingers for.

My partner Jack Xiao and I conducted a study to see if the length of one’s ring finger, compared to their index finger, had any association with that the student’s favorite class. Jack and I randomly selected 40 people from lunch and study halls and we measured their fingers and asked them their favorite class. 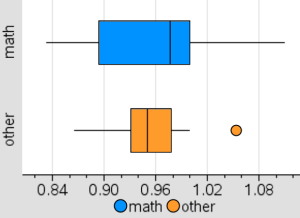 Our hypothesis going into the study was that people with longer ring fingers preferred math, and people who had a smaller ring finger preferred studying the arts, sciences, and other classes.

If our data showed a definite association between ring finger length and favorite class, the information could be used by parents, counselors, and teachers to help students decipher what classes they might excel in.

After collecting and crunching the data, Jack and I were able to make some conclusions.

For starters, lunch shouldn’t count as somebody’s favorite class. Secondly, the gender of the subject who had their fingers measured should have been recorded. Throughout the collection process, it seemed that people of different genders often had different ring finger to index finger ratios.

The data we gathered proved our hypothesis, that the longer the ring finger (which meant the lower the ratio) the more a student enjoyed math, was incorrect. The plot below shows that the average index finger over ring finger ratio was higher for students who preferred math.

Although our study did not display a groundbreaking association between ringer finger length and favorite class that would land Jack and me on the cover of every medical journal in America, it did not prove worthless. Two of the three students with the longest ring fingers (in comparison to their index finger) preferred to study math. This figure is especially significant when it is noted that only 28 percent of our sample of PHS students picked math as their favorite class.

Also, Jack and I learned that gender probably affects ring and index finger length and that agenda-book rulers do not serve as the most reliable tool for statistical observations.

While parents and teachers shouldn’t fret about their children’s ring finger length, they should tell them to wash their hands!