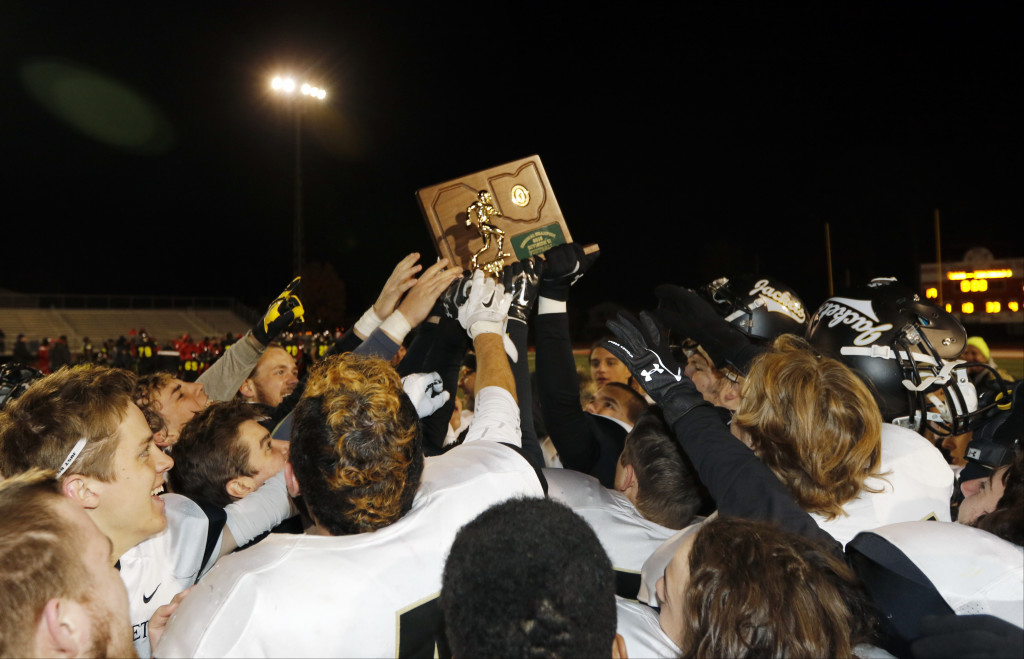 The Yellow Jackets improved to 13-0 and advanced to the state final four for the first time in school history. Perrysburg will now play No. 4 Cincinnati LaSalle (11-2), which defeated Kings Mills Kings 42-7 on Friday at Piqua (115 miles south of Perrysburg on I-75)

Glenville, whose only other loss came against Ohio’s top-ranked Division I team, Lakewood St. Edward 52-20 in Week 2, finished the season at 11-2.

>> Perrysburg-Glenville game IN PICTURES
>> VIDEO highlights of the game

Perrysburg senior quarterback Trevor Hafner scored three rushing touchdowns on runs of 60, 1, and 47 yards. Hafner also intercepted a pass late in the third quarter when the Tarblooders were still within striking distance.

The teams combined for 41 points in the first half as Perrysburg led 28-13 at the break. 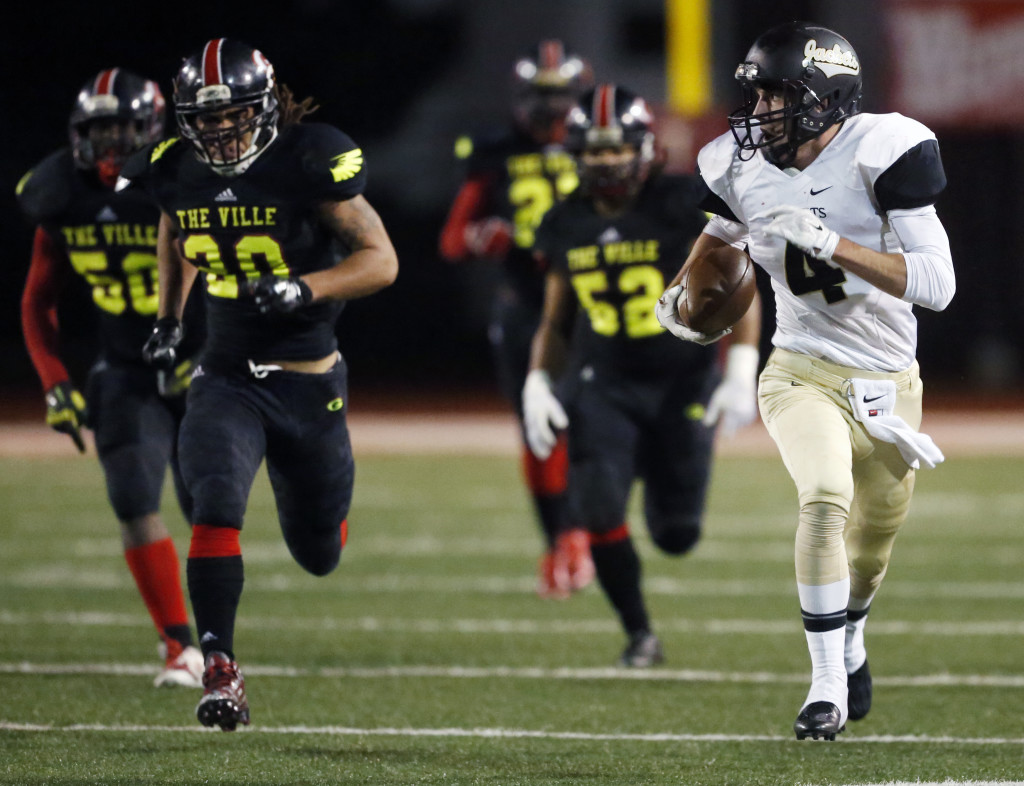 The game then turned into defensive struggle in the third quarter. The Yellow Jackets intercepted three passes in the second half to pull away. In the third, Tim Selhourst, Chase Banks, and Evan Conley all had key tackles for loss for Perrysburg.

Hafner then came up with the play of the second half when he stepped in front of a Glenville pass and intercepted it. He then returned it about 52 yards to the Glenville 9. Two plays later, on the second snap of the fourth quarter, Perrysburg took a 35-13 lead on Hafner’s one-yard sneak.

Perrysburg then forced its fourth turnover of the night. Jackson Klusmeyer stepped in front and intercepted a Glenville pass. Hafner then scored on a 47-yard run three plays later to make it 43-13 to force a running clock.

After the Tarblooders scored their third TD, Josh Haynes rushed for his second touchdown of the night to give Perrysburg a 50-19 lead.

In a very compelling first half, Perrysburg emerged with a 28-13 lead after forcing two key turnovers that led directly to two scores.

The Yellow Jackets were up just 21-13 with less than a minute left in the first half. Glenville had picked up a key first down on a fourth and 3 at the Perrysburg 31.

Glenville then had the ball on the Perrysburg 12 with less than 51 seconds left on fourth down and 2. Banks picked up a fumble and returned it 79 yards for a score. David Smith forced quarterback Marcus Drish to fumble Banks scooped it up and scored to give the Yellow Jackets a 28-13 lead and momentum just before the break.

Hafner scored on a 60-yard run as he busted free up the middle and then made a great stiff arm to will his way in to give the Yellow Jackets an early 7-0 lead.

Perrysburg then scored on another explosive, long play. Hafner found Evan Conley on a screen pass and Conley did the rest to score from 72 yards out to put the Jackets up 14-0. Conley ran free down the left sideline and then made a great cutback at the end to get in the endzone with 4:14 left in the first quarter.

Perrysburg then scored on the first play of the second quarter to take at 21-0 lead as Haynes scored on a five-yard run. A 34-yard pass from Hafner to Zach Honsberger set up Perrysburg at the Glenville 5.

Glenville got on the board after a nine play, 64 yard drive when Drish scored on 5 yard keeper. Perrysburg still led 21-7 with 9:25 left in first half.

Perrysburg had contained Glenville running back Demerius Goodwin in the first quarter. But he gained confidence in the second, rushing for more than 100 yards. Goodwin scored on a 13-yard run to pull the Tarblooders within 21-13 with 6:35 left in the second quarter.