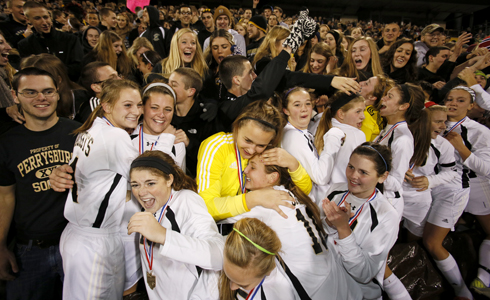 COLUMBUS – The Perrysburg girls soccer team became the first girls program from northwest Ohio to win a state title with a 1-0 win over Mason High School on Friday night  at Columbus Crew Stadium.

Senior standout forward Maddy Williams scored the only goal and senior goalie Chloe Buehler was phenomenal in net. Williams scored with 15:25 left in the first half on a penalty kick. It was her 48th goal of the season.

Buehler then took over and made several diving and leaping saves. She finished with nine stops and faced 25 shots overall.

>>Photo gallery from the title game

>>Photo gallery of send-off for players