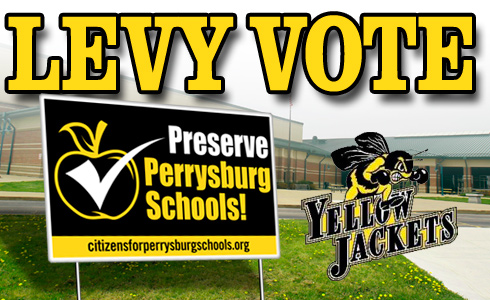 If the November levy fails, school officials predict cuts that would affect students in all grades. PHOTO ILLUSTRATION.

On Nov. 6, Perrysburg Schools will have a replacement school levy on the ballot. If you are old enough to vote and are registered to vote, this is the ballot issue that will affect you the most.

If the levy is approved, school will continue as is with some improvements, but if the levy fails there will be a lot more cuts than just the soup at lunch.

“This levy is a replacement levy from the one four years ago. The levy currently collects approximately $7.5 million, or 20 percent of the district’s revenue, annually,” Superintendent Thomas Hosler told eSomethin.com.

“As we move forward we want to benefit students in the most ways we can; through technology, through extracurricular, and through optional courses for students to take,” Hosler said.

The district will immediately be required to operate with a 20 percent loss of revenue starting on Jan. 1, 2013, if the levy is defeated, the superintendent said.

“We’re reluctant to hand the voter a list of things that will be taken away by this levy, because then they’ll say, ‘Well you’re threatening us,’ but at the end of the day the school system is like a business and without the funding we won’t be able to run as efficiently,” Hosler explained.

The Perrysburg Board of Education has recently released a contingency plan for the district in case it fails on Nov. 6. The plan utilizes the $1.1 million in the district’s carryover funds and eliminates approximately 97 jobs — many of them teachers — and many programs.

>> Superintendent’s letter to the community

Daniel Thompson, a high school math teacher who teaches trig/calculus and math analysis, and is a member of the Perrysburg Education Association, the union that represents teachers, said the cuts would be devastating to the district. “It will be a skeleton school. There will be significantly larger class sizes, less electives, and reduced foreign language classes.”

Of the 17 school districts in Lucas and Wood counties, Perrysburg ranks 13th in what it spends to educate a student.