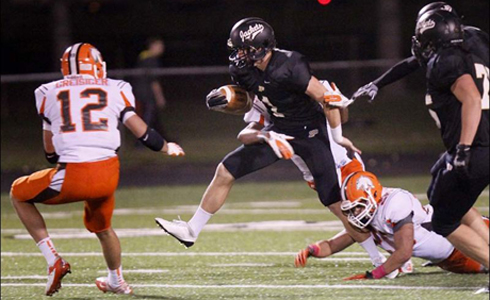 Senior quarterback Steve Slocum has been a catalyst all season for the Yellow Jackets who enter Friday’s game at 6-2 overall and 4-1 in the Northern Lakes League. BLADE photo

In August, while most high school students were lying by the pool or sleeping in the Perrysburg High School’s football team was hard at work.

The motto for the year — Win The Day — was laid before them. These three simple words have much meaning behind them.

“We were taught at the beginning of the year to focus on what is right in front of us,” said senior wide receiver Jimmy Reddick. “Leaving each day knowing we worked our hardest and played our best.”

Through this motto and senior leadership they became a team.

A great team they have become with a record of 6-2 overall and 4-1 in the Northern Lakes League.

The year started with a 54-14 win over Bowsher. The community was given a little idea of what was to be expected from the rest of the season.

The match-up with Clay is where the Yellow Jackets got their first challenge of the season. After a hard fought game the Jackets prevailed with a score of 24-23. Yet again Jacket fans got the taste of sweet victory.

It was known by all that the next game would be a tough one against Central Catholic.

The team stayed in the game, but victory slipped away, giving them the first loss of the season.

Next on the schedule was Springfield, with the Jackets manhandling the Blue Devils in a 50-28 win.

Anthony Wayne posed a challenge with its dominant offense, but the Jacket’s defense kept them in check with with a 31-7 Perrysburg win.

Then came Friday, Sept. 28. This was not just any Friday, this was Southview Friday.

“We had not beaten Southview since 2007,” said Coach Kregel.

The teams were evenly matched and the score went back and forth. At the half the Cougars were leading the Jackets but after a late stop by the Perrysburg defense the Jackets would end up on top.

It was ultimately the passion of the Jackets that gave them the edge. The Jackets ended up routing the Cougars 23-16.

“Beating Southview has been by far the highlight of the season,” said wide receiver Austin Bishop, a senior.

In front of a nearly sold out crowd on homecoming night, Perrysburg beat Northview by a score of 51-8.

Next on the schedule was Napoleon. A much anticipated game that would determine the NLL champion. In overtime the Jackets would lose by one point because of a failed two point conversion.

Coming off the tough loss the Jackets will face the Bowling Green Bobcats. The Bobcats are coming off a 42-20 win over the Springfield Blue Devils. They bring to the table a strong passing game that teams have found hard to manage.

Then will be the game every Perrysburg High School student looks forward to, the Maumee game. The Jackets have one goal in mind, bringing home the bell.

This cross-river rivalry game will also be senior night for the team — a time for them to receive some much deserved recognition.

“This group of seniors has done everything you want a senior class to do. They have prepared better than any class we have had before, they practice hard every day, and they represent the school and community with great pride. I couldn’t be prouder of this senior class,” said Coach Kregel.

There is nothing the seniors would want more than a chance to play in the playoffs. But before they get ahead of themselves they are focused on the next game and sticking to their motto — Win The Day.

Come out and support your football team Friday at 7 p.m. as they host the Bowling Green Bobcats. Show the Bobcats what Jacket Nation is all about and as Coach Kregel puts it: “If the place ain’t swayin’, we ain’t playin.’”